For a company thinking about leveraging the public cloud as part of its data center solution, latency can be a big concern. For some, unfortunately, latency isn’t considered until after they’ve already committed to using the public cloud and quickly becomes a costly issue. Others see the red flag ahead of time and perhaps only utilize public clouds in situations where latency won’t cause a problem.

The problem is the internet itself. It’s fast, but not instantaneous. Even under the best of conditions, data to and from a server, whether located on-premises or sitting in a carrier hotel, will take enough measurable time to make some processes sluggish or inoperable. If a bottleneck arises somewhere along the way, which depending on location can happen often, the entire system might become all but unusable.

Security can also be a concern as organizations might be wary of sending sensitive data across the public internet, whether that data is encrypted or not.

The big cloud providers recognized the problem early on and offered enterprise users direct wired access — for a fee of course — under plans like DirectConnect, ExpressRoute and Interconnect. Data center providers were also quick to understand the issue, with all offering direct-connect services — with the added bonus of direct connections to multiple cloud providers. Customers like choice, it seems.

While it’s pretty obvious that sending data back and forth through a direct connection will be more efficient than having it transit the internet, there have been no metrics — other than anecdotal evidence — measuring the difference.

That is, until today, with the release of a study conducted for data center operator Digital Realty by Krystallize Technologies, which shows significant improvements when using IBM Direct Link Colocation to connect with IBM Cloud Bluemix servers located in its data centers when compared with connections made via the internet.

“We really wanted to get some metrics into the industry,” Digital Realty’s CTO Chris Sharp told Data Center Knowledge, “because I don’t believe many companies have really boiled it down to Use Case A and Use Case B and then represent the delta between the two. That’s why we think this is drastically different, by trying to educate the market with actual metrics.”

Three issues were examined, starting with “file-read latency,” or the time it takes for a packet requested to be transmitted and arrive back at the file system. The second was “file-read throughput,” a measure of kilobytes of storage transmitted per second. Finally, the study looked at “application performance,” which is described as “how applications actually perform in the tested configurations.” 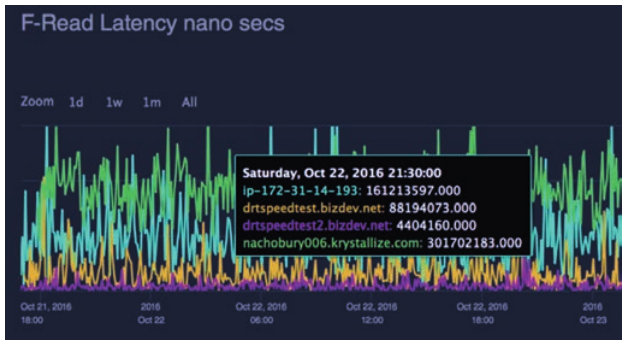 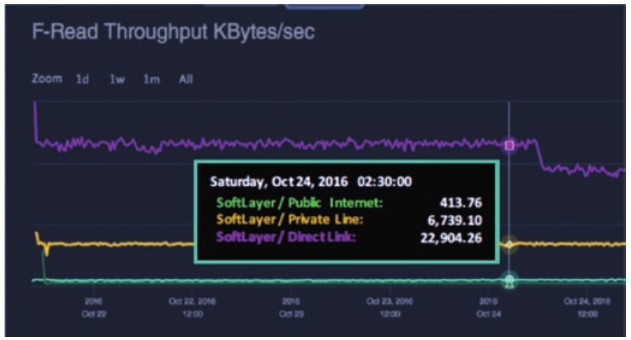 Although the test didn’t attempt to measure security in any way, direct connections are obviously more secure.

“If you do a private interconnection, you no longer have to have any public facing infrastructure to achieve your desired end state,” he said. “And so you’re not open to any DDoS attacks or any other malicious prying or hacking into your public infrastructure.”

The increased security afforded by directly connecting to cloud providers should be especially important to industries, such as health care and financial, in which security is mandated by law.